"A strong constitution that can stomach volatility now, will have many opportunities to add positive returns to their investment portfolios in the medium to longer term future."

Whilst we cannot make clear predictions about how much further markets may decline, we do know that this pandemic will eventually subside.

It is hard to remember that many market commentators and investment bank strategists were calling for a market correction, but it was almost impossible for anyone to predict that a respiratory virus from a Chinese rare-meat market, compounded by a Saudi-Russia oil price war would be so devastating. Clearly this has caused extreme levels of uncertainty, but it is important to remember that there is always uncertainty.

It is at times like these that it is essential to look at the data rather than the daily negative headlines. It is also crucial to stay calm and appreciate that it is too soon to reason why markets may have overreacted – 12 countries account for almost all COVID 19 cases, there is warmer weather coming that kills many respiratory diseases, whilst data from China and Italy is telling us that we can flatten the curve of cases, but it might just be that panic spreads quicker in the social media world of today.

In terms of investing, it is not easy, in fact it is an extremely uncomfortable time. But our experience tells us that if an asset allocation decision doesn’t feel uncomfortable, we’re probably acting consensually, which will simply lead to average investment results once markets start to recover.  The only way to navigate these periods with sanity and resilience is to have a long-term view.

Future investment decisions should be made on data not emotions. The median market performance two years after a correction is 45%. This suggests investing into corrections can enhance long-term performance. It does not mean that if you invest today the market will not go down further and if the market declines further it does not mean investing today was the wrong thing to do.

It is very hard to ignore daily wild price falls and not to feel gloomier day by day. In this blog we are not seeking to adopt an overtly optimistic tone but offer balance to some of the overwhelming negative sentiment we have seen.

Our SCM Portfolios are well spread – in terms of stocks, sectors and markets, but they have not been immune from recent falls and like many corrections the speed and variety of falls have often been more severe than appears immediately warranted.

I managed the first UK Long-Short Hedge Fund for 9.5 years between 1997 and 2006 during which there were many market corrections, but the fund still compounded at over 16% pa and one of the reasons for my success is when faced with situations e.g. the present one, the investment strategy I chose was the opposite to most hedge funds.  Resilience and tenacity rather than the herd behaviour that seeks the most consensual solution – i.e. not giving up at the point of maximum pain, takes courage, calmness and an ability to be contrarian.  I was always facing two choices at such times:

Reduce risk by locking in losses, thereby preventing further downside whilst recognising it is almost impossible to time the bottom.  But – once sentiment improves, be it due to a slowdown in reported deaths and potential medical antidotes, a mass low cost test etc, it may well be almost instant and the market will have then already priced in much of the potential recovery.  You are then faced with the unpalatable option of watching the market go up whilst in cash or buying back the very same assets sold at a far high price to that which they were sold.

The SCM Direct Team’s preferred choice.  Try and benefit from the more extreme dislocations so that when the rate of panic slows, the Portfolios will be at the forefront of recovery.  An example is the US$ – only a month ago we were switching significant amounts of the various GBP portfolios into US$, but it now looks opportune to reverse that switch, which we actioned over the last day or two. The pound is close to a 35 year low against the US$.  Similarly, we have for the second time since we launched in 2009, hedged the Japanese Yen for our Japanese equity exposure, which like the US$ became a port of safety in the recent storm.

We have made these major changes to take advantage of this dislocation over the last couple of days, and we have rebalanced the Portfolios to ensure we have added to some of the assets that have suffered the most.  Rebalancing at opportune times e.g. the present one can produce great long-term results as it forces you to keep the same asset allocations but add to those positions that have been hardest hit.

We are not reckless enough to predict that the bottom has been reached, but there are some positive signs.  Of course, there will be some assets that will not recover, but the beauty of index investing is that indexes naturally rebuild.  Individual companies will fail or leave the index, which means the index and its constituents are constantly evolving and changing to incorporate contemporary changes.  If we were invested in high yield bonds, we would be gravely concerned, not just because the securities are often highly indebted, but many are critically tied to the US shale gas industry which is fighting for its survival (again).

What has happened in this turmoil is that the markets have been indiscriminate, even though there is a world of difference in the credit quality between an Emerging Market Sovereign Bond and a High Yield credit, especially a US shale gas credit, the two have fared almost identically.  In the past meltdowns, for example in 2008 the extra yield spread on high yield debt (red line) would be much greater than emerging market bonds (blue line) but the stampede to liquidate this time has meant the two lines are indistinguishable:

We see the same in the world of investment grade bonds, as circumstances have changed, and the risk of default increased.  One would expect the extra spread to rise but these bonds have priced in 2008 style defaults and the price of ETFs have been harder hit than many corporate bond funds, simply because they have the liquidity and have been used to raise cash, but again things eventually normalise.

Companies are receiving various loans and benefits from governments, even companies at the eye of the storm e.g. Boeing are getting credit lines and many of these bond prices are now starting to normalise.  Here is a standard UK corporate bond ETF we hold – the price has been steady for about 6 months until falling from 65 on the 12th March to 52.3 on the 18th March and to 57.4 presently – i.e. a fall of 19.5% followed by a recovery of 9.8%. 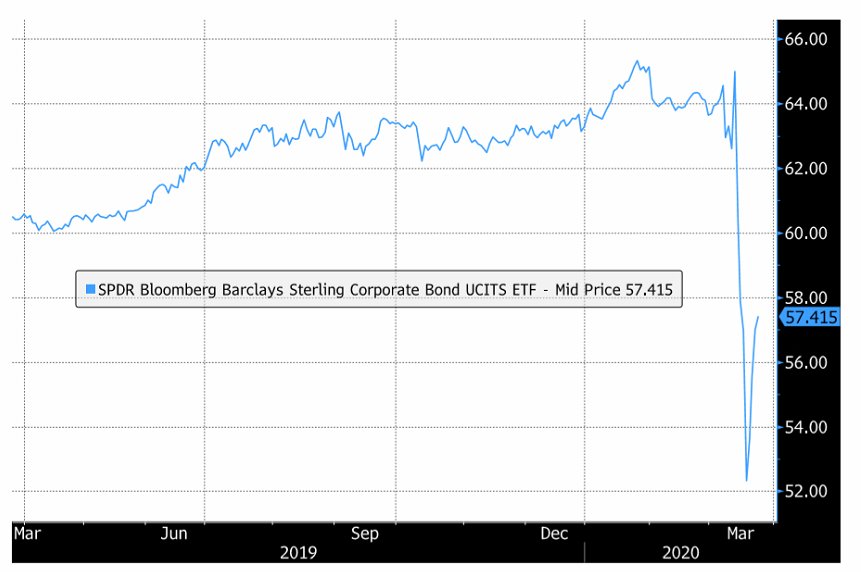 Corporate bond spreads have widened substantially in the last few months to levels higher than during the dotcom bubble and The Greek Debt crisis. The spreads were actually lower than in 2008 when the world thought the corporate bond market would collapse.

The speed at which this has happened is unprecedented, using the S&P 500 as the benchmark, this has been the quickest sell off in history:

This has led to increased volatility as measured by the VIX Index, which measures the implied volatility of options on the S&P 500 Index, but even this fear index (as it is known) is gradually returning to more normal levels from the recent elevated peak:

Governments willing to use every tool in their economic box

The actions by governments worldwide appear unprecedented in terms of loans to companies and individuals, guarantees, monetary payments, reduced interest rates, quantitative easing, direct payments into individuals accounts and many other mechanisms.  But ultimately these measures will only serve to mitigate the pain until economies are unfrozen and we all emerge from the various shutdowns across the world.

It is difficult to value individual equities due to current year dividends being very uncertain, as are the earnings.  In our view it is preferable to take a long-term approach that avoids these shorter-term valuation issues and look at valuation metrics e.g. the Yield Gap, the difference between the yield offered by the marker and that of a “risk free” government bond, usually 10Yr.

In the US, this gap has widened to its highest since the financial crash.

Looking at the UK, one of the hardest hit equity markets worldwide, the yield gap is unprecedented with the yield on UK equities shown in blue (admittedly some dividends will be cut this year or postponed) against the yield on UK gilts (shown in red): 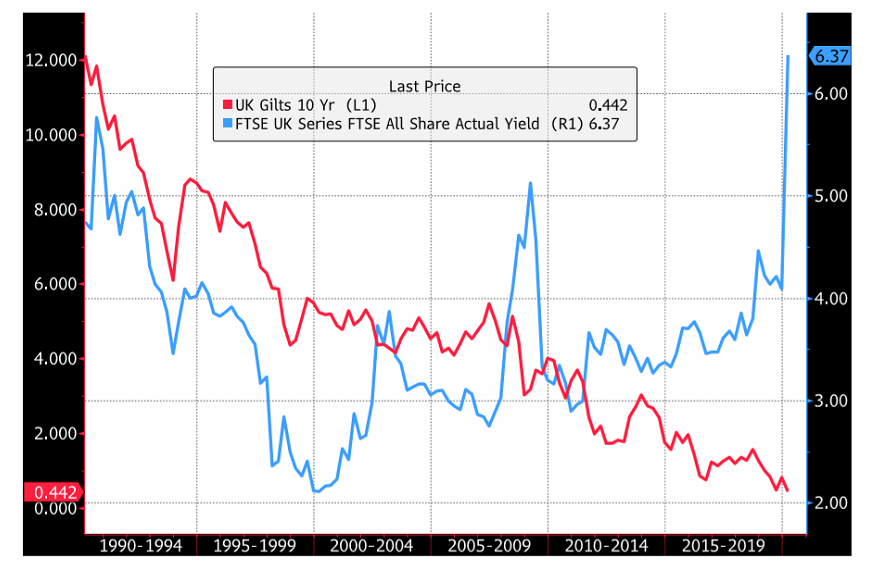 Not only are valuations of equities low, outside the US markets are valued lower than they were 20 years ago: 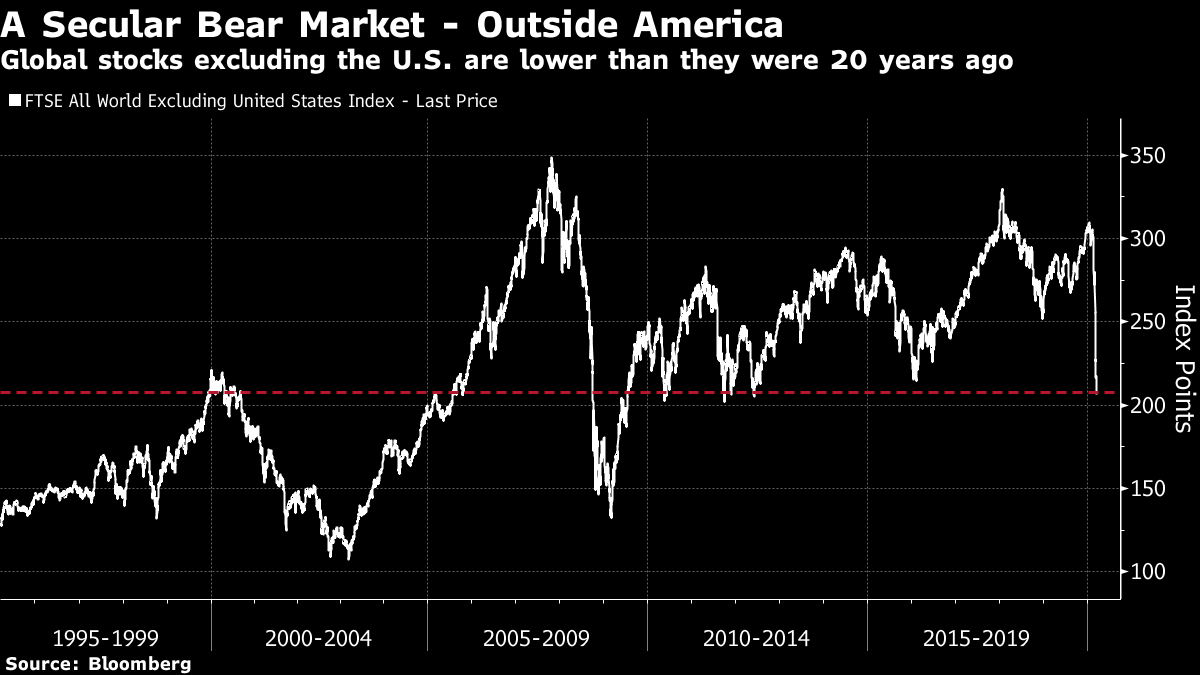 Warren Buffet wrote in the New York Times in 2008 (Link), declaring he was personally buying US shares once again. Although slightly early, his logical analysis and ability to ignore the noise resulted in him making substantial gains over the next 12 months: 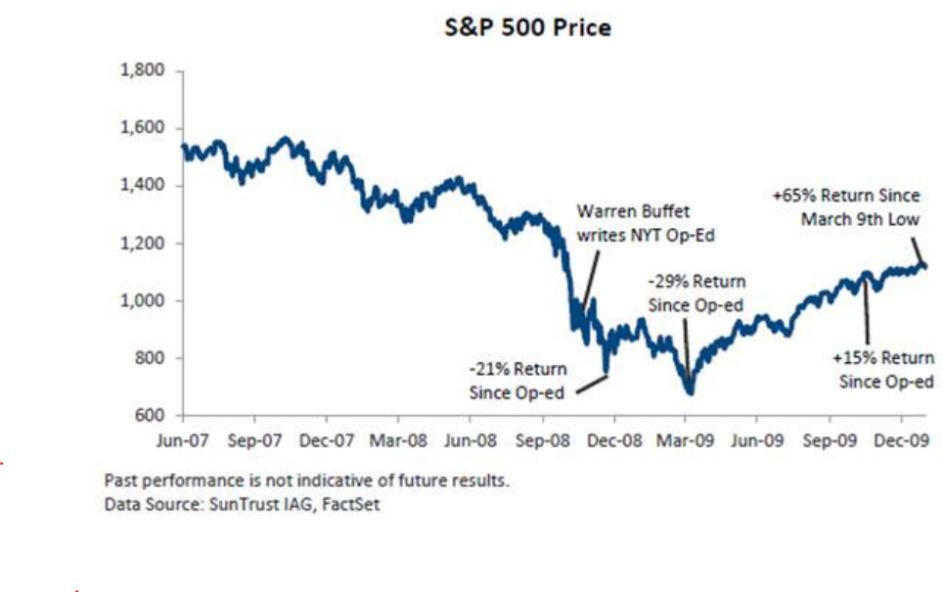 It is very easy to think you can time the market, but in practise missing just a few days either way can destroy returns – missing the best 10 days each year has been calculated to halve the returns from holding the S&P 500 Index throughout the year.

The disturbing tragic images and escalation of the virus in Italy marked the beginning of many of the market corrections and economic shutdowns, but the shutdown may appear to be slowing down the escalation of cases: 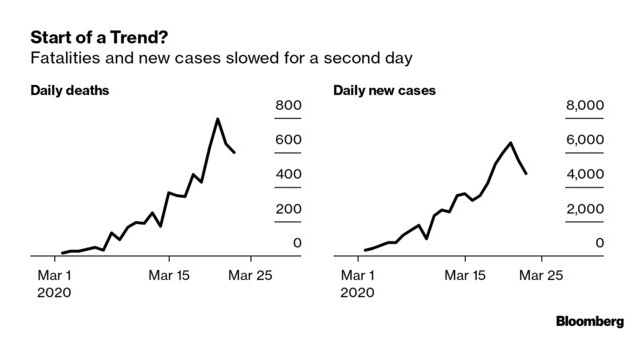 There are many drugs being developed, of which the most interesting at present appears to be the Gilead drug – https://www.bloomberg.com/news/articles/2020-03-19/gilead-analyst-doubles-down-on-call-for-covid-19-drug-approval

As previously stated, while it is impossible to time the market bottom, and it could fall further, investors must remember the longer term.  A strong constitution that can stomach volatility now, should benefit from enhanced positive returns from their investment portfolios in the medium to longer term.   The best guide to future returns is the price you pay for an asset at the start, by buying into assets when their valuations are low, tends to produce the greatest returns.

Here is a table showing the relationship in the US between the cyclically adjusted price-to-earnings ratio (CAPE), and the average annualised return over subsequent 10-year periods – you can see the lower the valuation, the higher the return:

The value of investments can go down in value as well as up, so you could get back less than you invest. It is therefore important that you understand the past performance is not a guide to future returns. Exchange rates may cause the value of overseas investments and the income arising from them to rise or fall.  SCM Direct does not give personal advice.  SCM Direct is a trading name of SCM Private LLP which is authorised and regulated by the Financial Conduct Authority to conduct investment business no. 497525. Registered in England and Wales, OC342778.