Many people make the mistake of thinking a small fee difference of 1% can’t make a big impact on their final returns. But due to the magic of compounding which Albert Einstein described as one of the most powerful forces in the universe, the negative impact tends to be much bigger than anticipated.

When investments, compounding occurs when the money you put away grows, and that increased profit is reinvested to earn more. The same can happen with fees. If you pay high fees, year after year, the end total can eat up a huge portion of your investment pot.

Alan and Gina Miller have been spearheading the fight for 100% fee and holdings transparency, and have been vocal about improving ethics and responsibility in the UK financial services industry since 2009; culminating in the launch of the True and Fair Campaign in January 2012: www.trueandfaircampaign.com

Through the campaign the Millers have worked tirelessly with Treasury, governments, global industry bodies and national regulators, successful contributed to three EU Directives – MiFID II, PRIPS and The Shareholder Directive.  Their successes have vastly improving investment and pension consumers right and protections across the UK and Europe.

No performance fees, no adviser charges, no initial charges and no exit penalties.

Fees will vary according to the current selection of ETFs and current levels of trading activity, latest fees shown in all monthly factsheets. The figures above are based on the average fees and charges, weighted by the amount invested within each of the SCM GBP Portfolios as at the end of July 2019. When investing via the Hubwise SIPP, an additional charge is made of 0.1%+VAT subject to a minimum annual charge of £15+VAT and a maximum annual charge of £50+VAT. An additional fee of £125 +VAT applies to any SIPP that is in drawdown. Other fees for work in relation to for commercial property, divorce & death for example are available on request and will be quoted to you before any work is carried out.

The average total fees when investing with traditional wealth managers and adviser firms appears to be c. 2.21% per annum. But when you add the average hidden transaction costs of c. 0.5% per annum, the average true Total Cost of Investing is c. 2.71% per annum.

The average SCM Direct Total Cost of Investing of c. 1.01% per annum (updated monthly across all our factsheets).

Due to the magic/ mathematics force of compounding, what appears to be a small 1.70% per annum difference can have a dramatic negative impact on your investments over the medium to long-term. 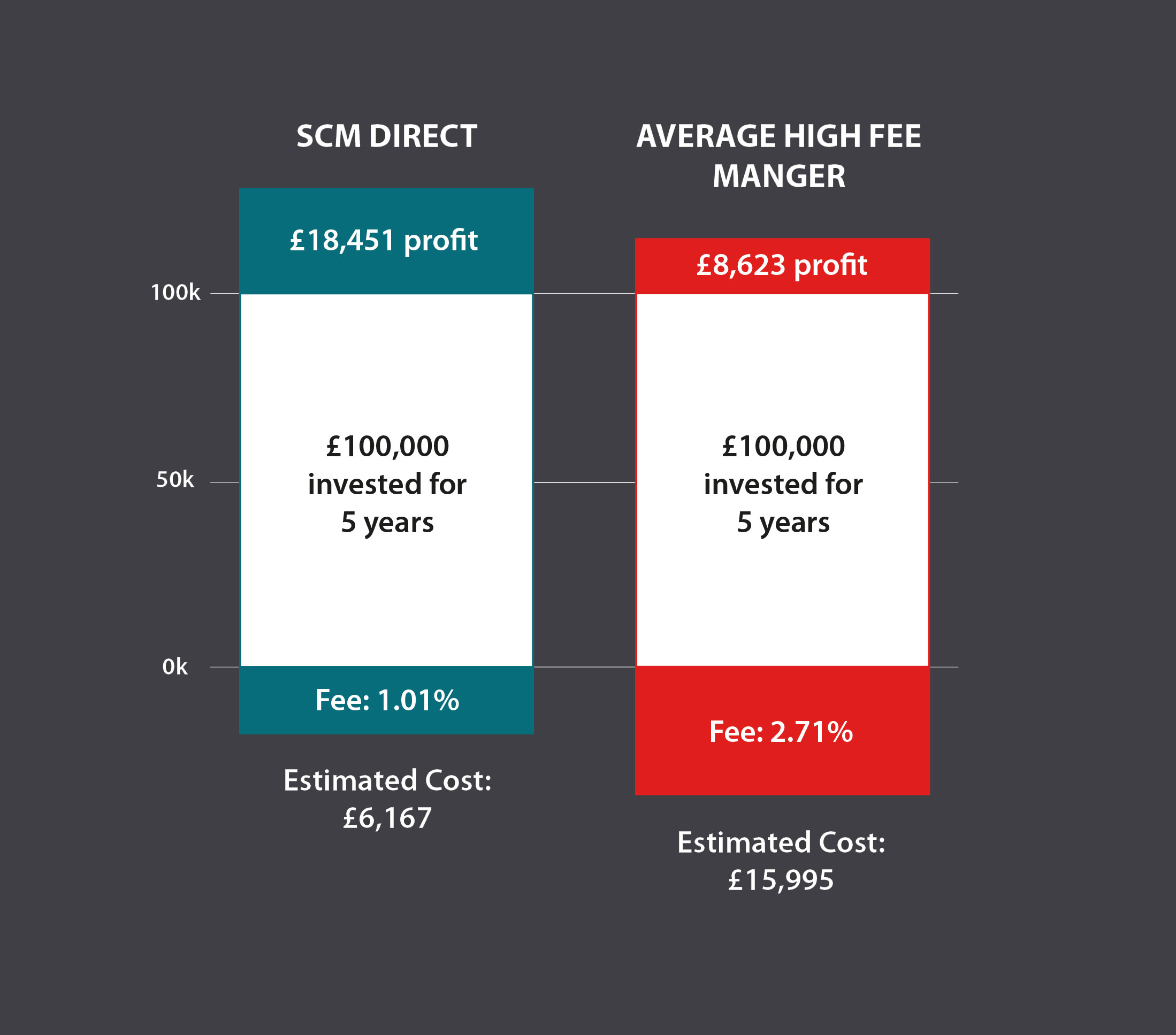 SCM Direct focuses on an investment process that balances Cost, Risk and Returns underpinned by evidence, experience and ethics.

Our passion is to deliver the best possible investment outcomes by concentrating on tactical asset allocations to produce consistent returns in the most efficient, cost effective manner whilst concentrating on fundamentals, and never losing sight of our responsibility to clients.